To Mildura without a Camera

How many times do you depart on a trip going through your mind what you may have left behind only to find out when it's too far to turn back that you have left that most important thing behind.

In days past whenever we took the boys to the Mount for sport it was always at the "bends" that something would be remembered and we would turn back to get it, any further and it was bad luck. Well when we got to Pinnaroo and wanted to take a picture it was realised  that the camera and the phone charger and the spare night light ( all in the same bag) was found to be missing. Here we were heading off to Mildura, a warm place we had never visited, a picturesque place as it turned out, and no camera to record the sights! Bloody absent minded senior! Me that is.

Still we drove on through Loxton, a lovely place where the Murray River was in flood, no pictures for you to enjoy, on through Renmark not much to see there anyway , past the winery at Berri, plenty of them in Coonawarra if you want a photo of one, onto Paringa the last place you could get a decent pasty which we did  nut you dont need a picture of a pasty do you.Then on a straight road  through saltbush country which was not worth remembering , the countryside that is, until we hit the Sunraysia and Mildura which was worth recording but no camera!

A nice cabin in a caravan park on the river was a good omen with everything we needed to be comfortable at a nice price for seniors and so the trip to Mildura proved to be "a most enjoyable time", to quote someone, probably Mary Poppins.

The shopping centre was easy to find, the fuel was as cheap as Melbourne and there were a nice couple of walks from the park as the tracks led us into the centre or as far as Merbein following the Murray. Just a couple of kms was enough for us though.

We found that a steam driven paddle steamer was making two hour tours from the park on the Murray just south of the city centre leaving at 11 am and we were on it in flash as there was a seniors discount! Pity we had no camera to record the riverbank scenery  as as we passed and it's trip through the lock (Nuran's first through a lock). The captain took us back to the bottom of the weir (which is why there is a lock) and we could see how much water was flowing down the Murray fed by the recent rains in Victoria and NSW as it was at least a metre above the weir. He said when it gets to above 3 metres they remove the weir and the lock controls as the whole lot would be under water.

Anyway we bought a couple of postcards to show you and remind us of the paddle steamer PS Melbourne. 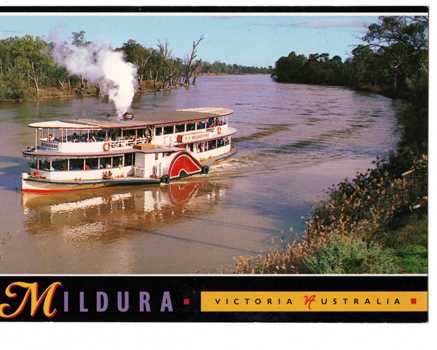 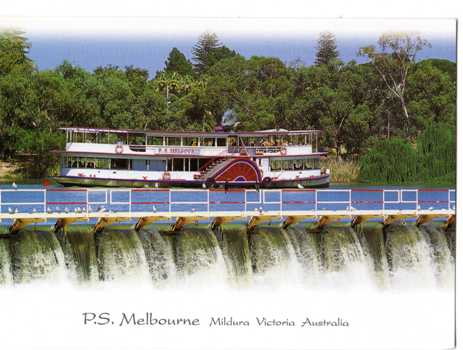 Ah it was nice to wear shorts the whole time we were there and to listen to the air conditioner rattling away to cool us down, well Nuran down, I went outside to enjoy the heat and the cold beer. Until the mossies paid a call and went inside for a cup of tea. Being close to the river is good until night falls and the body heat is  attractive to mossies  despite the obvious alcohol poisoning they would die from once they ingested my A rh- blood blended with Coopers Pale Ale.

We made a trip to Wentworth where the Darling meets the Murray and although the town has seen better days the confluence of the two rivers was a sight to behold. Water was streaming down the Darling coloured by white mud and water was flowing down the Murray which was about three times as wide with a greenish hue and the two waters met and remained delineated by their colour for a kilometre or more before they crashed over the weir and were mingled for all time on their way to South Australia. 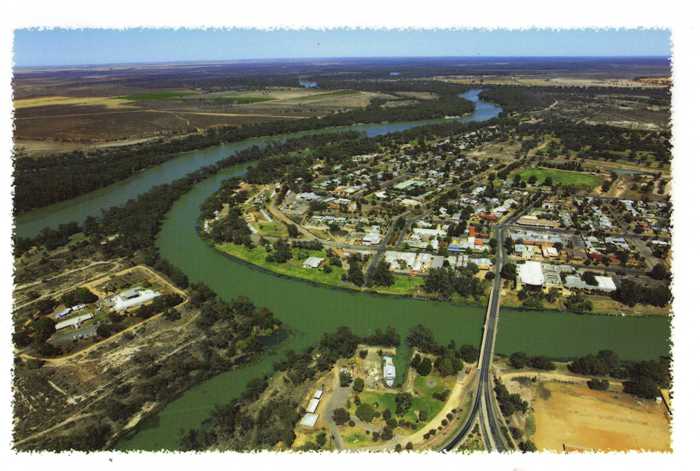 I was wearing sandals so I dipped a toe in the Darling and then crossed  the narrow island and dipped the other toe in the Murray not 50 yards apart at that point.

If only I had a camera!

Still an experience recorded and maybe not repeated unless the conditions are as  favourable as they are this year, with all the Queensland rain filling the Darling and the Murray receiving large flows from the Goulburn and Murrumbidgee. The basin actually drains all rivers than run west from the Dividing range but of course with irrigators upstream taking more than their fair share then it takes a good season to get them both to flow like they are at present.

Anyway all good things have to come to an end as the money runs out and so we headed home through Ouyen, where they make the best Vanilla Slices in the land, and we can verify that they are indeed very very nice, then on to Horsham to lose some money on some Mount Gambier dish lickers that were running , but slowly, against the Vics.dogs. Horsham has grown since we were last there some 16 years ago but the lolly shop that the boys loved has gone and in its place is an op shop. So we bought some pillow cases there at a bargain price ,10 for $2, cotton ex the local hospital and I love cotton pillow cases .

I could take a picture of the pillow cases as we have the camera available but I don't think it will add to the story!

So we are off to Mildura again to take the pictures, perhaps next year.